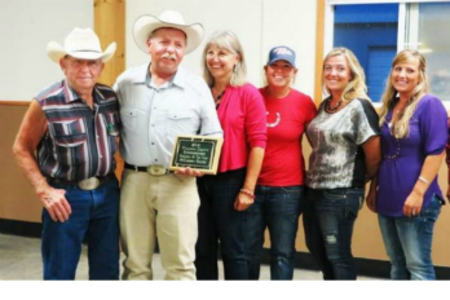 History
In 1904 C.M. McClaran first traveled to the beautiful Wallowa Valley.  Shortly after in 1919 his son, Joe, started the ranch in the lower Imnaha.  Originally McClaran Ranch was a sheep operation but during WWII, Joe switched the operation to a solely cattle ranch.  When Jack McClaran returned WWII, and after graduating from the University of Idaho, he and his wife Marjorie returned to the canyons to continue the ranching legacy as well as raise their three children Chris, Katy and current ranch manager, Scott.

Scott, along with wife Vicki, and parents Marjorie and Jack have done what many family businesses have failed to do - attract the next generation back to the ranch. Daughters Jill, Beth, and Maggie following graduation from University Idaho and Oregon State University, have all come back home to the canyons, determined to carry on the ranching legacy started by their great, great, grandfather.

A highlight of the annual Wallowa County Stockgrowers dinner awards program was the presentation of the Grassman of the Year Award to the fourth-generation McClaran Ranch, represented by the current two generations of the historic family operation, Scott and Vickie McClaran of Joseph and their daughters, Jill, Maggie and Beth.

They received the award from Dennis Sheehy, 2012 Grassman of the Year, who praised the ranch and the family.

The family operation was founded by Joe McClaran after World War I at Lightning Creek as a sheep ranch, which transitioned to cattle under the leadership of his son and Scott’s father, the late Jack McClaran. The far-flung ranch is based primarily in the rugged Lower Imnaha country.

“Four generations of McClarans have operated in a tough environment and made a go of it by taking care of their grass,” Sheehy said.

Sheehy itemized several reasons that the McClaran Ranch warranted Grassman of the Year honors, noting that the reason the ranch has continued to operate through four generations “is at least partially due to their knowledge and judicious use of grassland resources,” adding that he is aware of a number of instances of the ranch willingly taking risks in improving that resource. For example, a number of years ago, he said, the family took steps to solve the problem of their Lightning Creek ranch being a bottleneck in the spring and the fall seasons when moving cattle.

Sheehy also pointed to the Wallowa-Whitman National Forest’s Lower Imnaha Rangeland Analysis – which is in its final stages and covers an area where the McClaran Ranch has multi-allotments – as describing an “overall improving trend in rangeland conditions.”

The Grassman award announcement came as a total surprise to Scott McClaran, who had just been the presenter of the 2014 Honorary Lifetime Stockgrowers honor to longtime McClaran Ranch employee, Tip Proctor, and his wife Ruth, now both in their 80s.

McClaran noted that the Proctors had moved 29 times in their first five years of marriage, and said they’ve spent 42 years total in Wallowa County in the last 65 years, despite three trips back and forth to Missouri plus years spent here and there on ranches and in other endeavors in Prineville, Lakeview and other places.

“It takes a special place to hold the interest of these drifters,” McClaran said, adding that wherever they’ve gone they’ve made close friends. He noted that now the couple are octogenarians and have moved 63 times during their married years, they are planning to make it 64 by moving back to Prineville and to hang out with their daughter there.

“I did a lot of things and I’ve enjoyed every bit of it,” said Tip Proctor, who was honored as Hells Canyon Mule Days grand marshal in 2011.

After then accepting the Grassman plaque on behalf of the ranch, McClaran expressed the family’s “heartfelt” thanks. Speaking for himself and wife Vickie, McClaran said that with the passing of both his parents, “sharing what we with do with our girls is one of the joys of our lives.”

Jack McClaran, who died less than a year ago in December 1913, was previously awarded the titles of both Grassman and Cattleman of the Year by the Stockgrowers. Wife and lifelong partner Marjorie McClaran, died in July this year.

Among other McClaran family honors is also the Hells Canyon Mule Days grand marshal title, which went to Joe McClaran in 1988 when he was 94 and reminisced about how mule teams were the only way to get supplies to the ranch until a road from Fence Creek to Dug Bar was completed around 1952, and a rough road up Lightning Creek was then built.

Elane Dickenson/Chieftain Scott McClaran holds the McClaran Ranch’s Grassman of the Year plaque presented at the Wallowa County Stockgrowers annual dinner awards program Saturday night, Aug. 16, at Cloverleaf Hall. To his left is longtime ranch employee Tip Proctor, recipient of the Stockgrowers Honorary Member award. To McClaran’s right are wife Vickie and daughters Beth, Jill and Maggie, who are all active in the operation of the fourth-generation ranch.

Four Generations of Learning How to Best Use & Respect the Land"